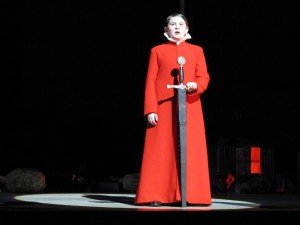 Charles Edwards has directed and designed the sets and lighting for a new production of  Handel’s rarely-staged oratorio Joshua for Opera North. First performed in Covent Garden in 1748, it recounts the entry of the Israelites into the Promised Land; its original audience would have seen it as a metaphor for a beleaguered Protestant Britain.

As Anna Picard says in The Independent, Edwards

“proposes a parallel between the Old Testament story of the warrior who razed the walls of Jericho and the creation of the modern state of Israel… Here is idealism, heroism and corruption: the establishment of a homeland for the dispossessed of Europe… The production budget is tight, the moral tone ruthless, the imagery tirelessly beautiful and provocative.”

In her review for the Observer Fiona Maddocks praised the simple, low-budget staging,  the singing, and the way in that this interpretation has ‘given us an additional element to ponder.’  The set drew on photographs of Palestine from the 1930s-40s by Rudi Weissenstein:  ‘Black-and-white photos were projected, at enormous, grainy size, on portable screens. The shell of the Grand theatre stage itself was visible: rear doors, fly loft, rigging. Appreciating current tight budgets – Opera North faces a £1.6m cut – this solution worked well.”  Both reviews noted the impact of Edwards’  lighting which “managed to hint at the visual moods of a Rembrandt biblical painting” and suggested the pitiless heat outside.

What’s on Stage agreed that “a precise updating to the early years of the post-war state of Israel works dramatically and emotionally. Likewise the bare stage, with images of destruction and rural projections for the gentler scenes, fits as well with the dramatised oratorio as with these days of austerity in the opera house.”

Bachtrack thought it a “successful exercise in the art of the possible. The magnificent Opera North Chorus is able to flaunt itself extensively, a stripped set with backstage views is used to good effect, a terrific orchestra is tightly conducted by Stephen Layton and there are no weak links amongst the soloists.”  Describing it as “imaginatively directed, designed and lit by Charles Edwards”, The Stage welcomed it as “a thought-provoking piece of theatre that deserves to be more widely seen than its short current run allows”, also praising the effectiveness of his minimal sets and the “considerable flair” of his lighting.